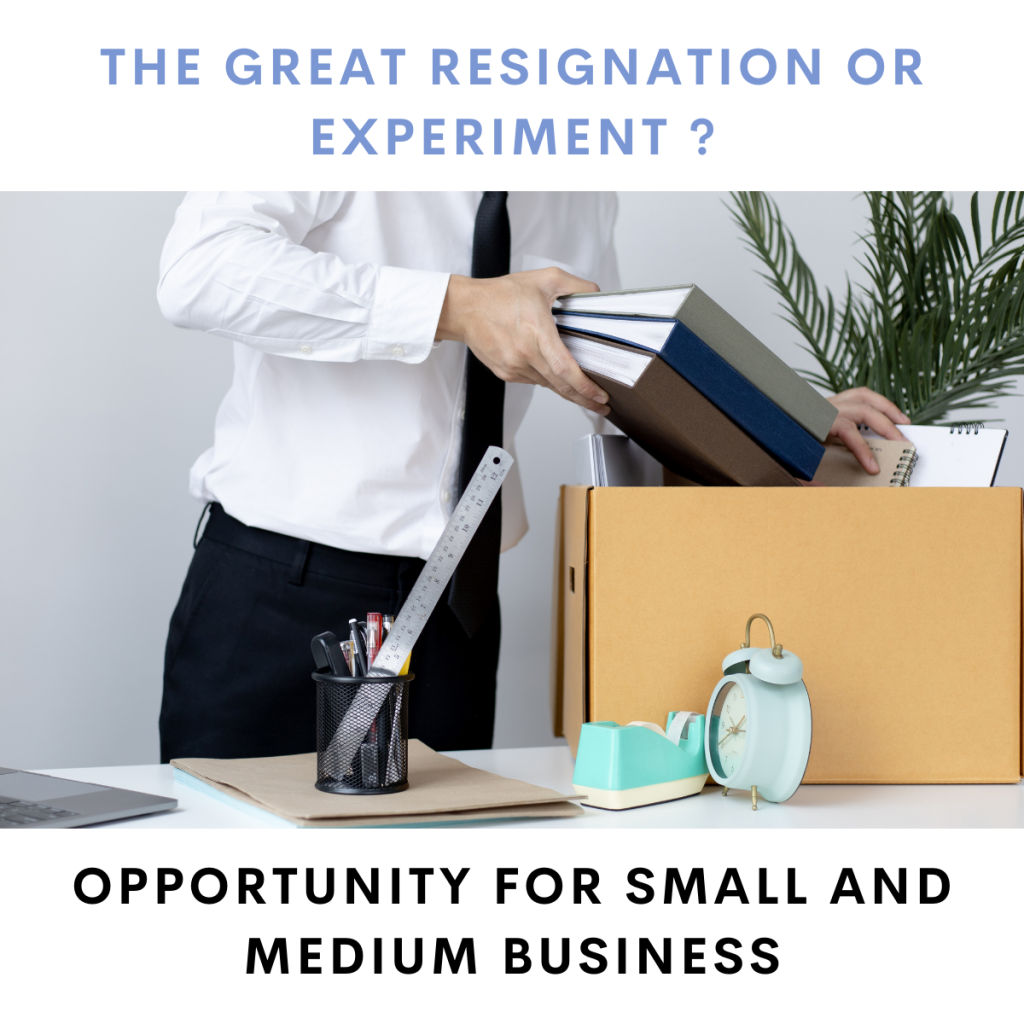 This subject has got Economic Journalists, Business Academics and some large companies including Microsoft, all researching and writing about the Great Resignation.

I’m sure there will be some fascinating data and information that will come out of this research, Thesis written and hypotheses formed as to why and how the Pandemic has altered our lives. Predictions are now being made based on this early data.

Here are a few that I’ve read so far.

Who is driving the great resignation by by Ian Cook

Another HBR Article ‘I quit’ is all the rage. Blip or sea change?

“According to the latest U.S. Bureau of Labor report, 4.3 million quit their jobs in August, 242,000 more than in July. The monthly quit rate hit a new high, at 2.9 percent. Though quitting is happening across all job sectors and among workers at all skill levels, it was up in August in hospitality and food services, wholesale trade, and in state and local education.”

The possible reasons for the Great Resignation

I’m going to weigh in here with my own, granted unscientific prediction, and the possible reasons for this Great Resignation.

First let’s start with the reason. Shit Managers, Shit Management and people sick of being treated like Shit.

That’s about as scientific as I think I need to get.

I started my “Emotional Intelligence journey” over 30 years ago and I really enjoy reading the latest version in the Personal Development industry, but really, I think we have enough. What we need is people to be accountable for their behaviour and be genuinely interested in caring for each other.

Is it any more complicated than that? Apparently it is and we need Physiological Safety programs that don’t believe in KPI’s because they are not …. ‘something’ — oh give me a break.

Here’s how I can tell a business is ‘psychologically safe’.

It’s OK to make mistakes. And when you do, your Manager asks “What did I get wrong?”

It’s fun to come to work. I didn’t say easy but it is enJOYable

Try this on for size

You’ve been trained, or are in training to take your Manager’s job. Your Manager is not planning to leave, but they are so comfortable inside the business that they want you to succeed and be better than them. They are enthusiastically on your side.

Now I’m not saying that this is an easy process and it does take time, and what makes it harder are the saboteurs, ego maniacs, nepotists (is that a word?), hubris,  misogynistic, racist, bullying, “you don’t know anything” statements (young to the old and old to the young).

So to counteract this we are talking about building a culture that does not tolerate any of these behaviours.

In my experience it rests on the shoulder of one or two people at the head of the organisation to make the brave and courageous decision to put people first.

I hear this statement all the time. Our people are our greatest Asset ! Really? Where are they on your Balance Sheet? Oh I see them, they are on the Liabilities side, so stop telling Porky’s (I was going to say Bullshit but I shouldn’t swear so much).

A toxic, or less than psychologically safe environment, usually has a certain bad behaviour that is acceptable and tolerated. Usually linked to productivity or performance.

A Culturally Safe place happens when the Leader makes the decision that performance will improve by valuing people more than profit and understanding that profit always follows quality and satisfied people.

My advice is don’t start with this huge unachievable objective to change everyone.

Bring in a series of Cultural Changes and introduce it in a small and willing team with a Team Leader who understands the value of Cultural Safety. Trying to introduce across the whole organisation is a laudable goal but unrealistic.

Prove that it can be done with the team who believes it can be done. Give them everything they need to make the change and then let them go.

In six months they will be making significant improvement, making money, the envy of their peers, and you end up with a healthy dose of FOMO.

They’ll start asking “Why haven’t I got those resources and help?”

I became extremely passionate about this very subject when I went to Papua New Guinea in 2009 and started working as a Human Resource Consultant. I thought a HR Consultant recruited people and a HR Manager Hired, Fired and Paid people. Em tasol (translation “that’s all”)

Over time I came to realise that the HR Department could add so much value if they were able to create an environment where the Managers of Departments were the HR Manager and were the support to their Team. Psychological safety or as I like to call it The Trust Bank Deposit

I was told by the Old Timers who sat at the Table of Truth at the Yacht Club that I would never …… They looked at me as a Green-horn-do-gooder who just didn’t understand the Colonial style of management. Ten years on and I can honestly say I proved them wrong.

It starts with people Managers not the HR Department

Let me explain. Years ago, when there were fax machines (Gen Z ask your Parents) and no mobile phones, the HR Department was called the Personnel Department. That’s where the files were kept, the Policies were developed, the pays were handed out, and the Salary Awards were monitored and managed.

Training was usually done by the Training Department or OTJ training managed by the Manager.

The person who managed the people (HR Manager) was the Manager or Supervisor of people.

Then over time we had a slow migration of ‘people accountability’ from the Manager’s to the HR Department. The increased awareness of Occupational Health and Safety, Learning and Development Programs, Enterprise Agreements, Leadership and Management Programs, et al all designed to improve the conditions and safety of the staff (all good things) and this all got too hard for the Managers and Industrial Lawyers and Industry experts got involved.

For the poor manager it was frankly too complicated to drive. It needed to be coordinated. Enter stage left, the HR Department, and dare I say a power battle began. Ironically.

Combined with this, the Managers were asked to more with less and KPI’s and Performance Management became their life and death (dramatic I know) discussions. Salaries went up with promotions; lifestyles got used to; time to success closed in to beat the competition and make more money; the badge of honour was given to the first one in and last one out; working weekends to get the Report written was the norm. And here we are.

So, who would blame the current generation not to want that in their lives.

But I think, even with all of that in front of them, they would do it if they were just treated like humans. But for whatever reason we seem to think that it’s OK to treat a fellow Human Being like a commodity because of a hierarchical nonsense.

So back to the question. The Great Resignation or the Great Experiment?

Again revisiting the past, to the 80’s, when my generation (Boomers) were going through the Sea and Tree Change (sound familiar). Back then it was called the Big Shift and that was fuelled by the ability to ‘sell up’ after a Property boom, and bail from the hustle and bustle. That suited the adults who had lived, but 20 years later the Gen X’ers migrated back to the cities to study, fall in love, and find friends and work. And so the cycle repeated itself.

And in 2021 here we go again, but I think for different reasons.

The Pandemic provided an opportunity for individuals to reassess there situation. They had the experience of saving hours each week in meaningless time in traffic, a Bus or Train.

They could hold meetings with clients and colleagues without jumping on a plane for the day or living out of a suitcase. It sounds glamorous but try it for 40 weeks out of 52 and the shine soon wears off.

As long as the job got done, everyone’s happy.

And the list goes on and I’m sure there will many Research Papers and Thesis written to find the real effects of the Pandemic.

I honestly think that the businesses that started years ago to build a Culturally Safe environment and had their employees at the heart have a march on the competition.

It’s what’s been called the Employer of Choice. Some corporate employers have tried to differentiate themselves from others and make it more attractive for employees to join.

The motivation was purely economical. The cost of loosing an employee is anywhere been 34% and 213% of Total Annual Remuneration and that is a huge number off the bottom line when multiplied by ten’s if not hundreds of departing employees.

This is where Small and Medium Business can benefit.

People don’t leave for money, they leave because of Internal Inequity. This is where they feel that they are being treated unfairly compared to their colleagues.

A whole other Blog on that subject to come.

But once they are fed up, they start looking and rarely leave for a job that pays less, so when you do the exit interview, you think you didn’t pay them enough, but in fact you just pissed them off.

Until now. I predict that the people leaving their jobs in the Great Resignation will be happy to work for less provided the employer provides a ‘safe and fun place, show they care and value what they do, and communicate openly and honestly.

Is it as simple as that. No. But is sure is a great start.

What I don’t know is whether the corporate world will fight back with a change of heart and culture, or we just see another generation fill in the void and we rinse and repeat. I suggest each generation makes its own mistakes and I sense this one is no different.