There’s a major people tsunami approaching small and medium businesses in 2023. Do you see it coming?

It’s a wave of stress that business owners are facing to hold onto quality staff or recruit the right people to deal with pent-up demand.

One of the drivers is inflation and the expected under-employment statistics predicted to put upward pressure on salaries, and an expected ‘Job-hopping’ of people between employers, because they can.

It’s a known fact that people don’t leave for money, they start looking because they are unhappy, and then they leave for an offer of more money. And the promise of a better job.

I’ve attached some information that I think you’ll find valuable.

Don’t make the mistake of racing to the bottom

The natural reaction is to throw money at the problem but that may not be the best or smartest approach.

I saw a similar situation in Papua New Guinea in 2015 when the EXXON PNG LNG Project caravan hit town and salaries of up to double were offered to lure away quality staff.

It’s going to require every ounce of your skills to keep and find quality people over the next few years.

I’d like to help by giving you a process I used to combat the EXXON juggernaut.

It’s a Capability and Capacity Workforce Plan. It’s a 4 step process that approaches the problem from a slightly different angle.

I consulted with some of the largest private and Government businesses in PNG using this approach, so I know it works.

We call it becoming an Employer of Choice. 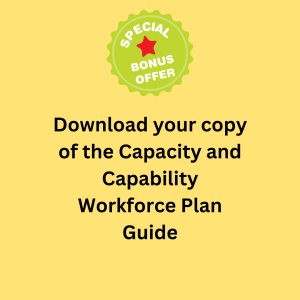